Originally from Bridgewater, Virginia, Bobby Fonta began his training under Professional Wrestling Legend Jimmy Valiant at Boogie’s Pro Wrestling Camp at the tender age of 15. In 2004 at the age of 16 he had his first match in front of a live audience. 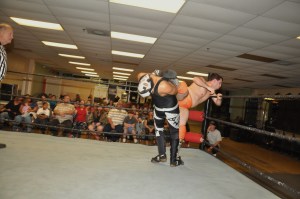 He wrestled in NC, IN, OH, and WV before moving to Orlando, Florida in 2007 in hopes of furthering his career at TNA’s Impact wrestling show where he was a fan favorite on the TNA Gutcheck.

Recently Bobby Fonta has become a major player at Pro Wrestling Fit Florida’s Championship Wrestling From Florida show in Orlando. Before that he was the NWA Florida Jr Heavy Weight Champion and is looking to once again hold the gold with PWF.

Since moving to Florida he has continued his travels to wrestle in SC, Puerto Rico, and even the state of Texas where he was a participant in the GWT tournament.  He has earned himself the nickname “Dancing Machine” for the way he enters the ring. Bobby’s kid friendly character makes him likable for all ages. If you are interested in booking Bobby Fonta for your next Pro Wrestling related event contact him via email at bobbyfonta1@gmail.com. Thanks for visiting the page!